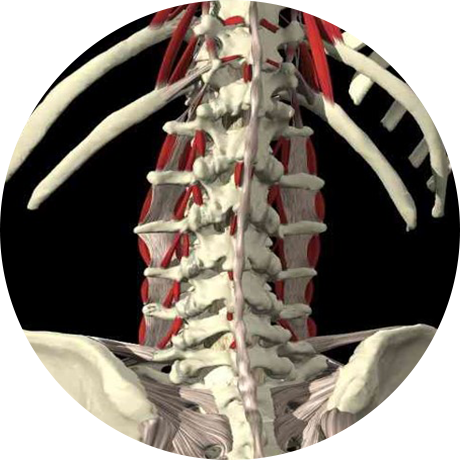 This is useful for:

Ligaments help to provide stability in the joints. They prevent the joint from moving more than the ‘normal’ range (though what is ‘normal’ varies from one individual to another). Some people have lax ligaments that allow more than ‘normal’ movement – often spoken of as ‘double jointed’.

In the spine there is a complex arrangement of ligaments, both between each vertebral segment and between the spine and pelvis, which allows flexibility in some directions and produces restraint in others.

Sometimes ligaments can be overstretched, or even torn (as in a sprained ankle). The ligament may then not control the joint adequately – thus leading to ‘instability’ which may put abnormal stresses on the joints and discs in the spine.

In women, the pelvic joints need to be supple for child bearing, and so the ligaments soften and stretch more readily. Sometimes they do not tighten up after childbirth and therefore allow too much movement – hence ‘sacroiliac instability’.

Sclerosant or hypertonic dextrose injections work by stimulating the body to make new fibres which are laid down within the substance of the ligaments, thickening and strengthening them. The solution: phenol 2% dextrose 30% glycerol 30% is mixed with local anaesthetic, and a small amount (half a cc) is injected into each end of the ligament, close to its attachment to the bone. Increasingly hypertonic dextrose with out the phenol is being used to reduce post injection soreness.

This initially provokes inflammation, attracting the cells that make collagen fibre to the area. Over the ensuing weeks, the fibre is incorporated into the existing ligament.

Each ligament has to be stimulated 3 or 4 times (sometimes up to 6), at intervals of a week, in order to produce sound fibrous development. Hence the injections are given as a course of treatment.

The sclerosant solution used for the injection is used in other treatment, such as varicose veins, so it is known to be safe. However, because prolotherapy for ligaments is not widely practised, it has not yet been licensed for this particular type of treatment. Because the organic compounds in the solution are rapidly disposed of by the body, it is safe to have a repeat course of treatment – should it be necessary.

Prolotherapy injections do NOT create scar tissue but healthy collagen fibres in the lax ligaments.

Injections are commonly given in the lumbar region, sacroiliac region, thoracic and cervical spine. They are also useful in the ankle and shoulder region.

When receiving these injections, ENTONOX analgesia may be offered (Nitrous oxide and oxygen, as used in labour) to relieve the discomfort of the injection. Intra-venous sedation is also available for those who prefer it. This produces a relaxed and sleepy state. With sedation, arrangement for transport home will be necessary.

This website uses cookies to improve your experience while you navigate through the website. Out of these, the cookies that are categorized as necessary are stored on your browser as they are essential for the working of basic functionalities of the website. We also use third-party cookies that help us analyze and understand how you use this website. These cookies will be stored in your browser only with your consent. You also have the option to opt-out of these cookies. But opting out of some of these cookies may affect your browsing experience.
Necessary Always Enabled

Any cookies that may not be particularly necessary for the website to function and is used specifically to collect user personal data via analytics, ads, other embedded contents are termed as non-necessary cookies. It is mandatory to procure user consent prior to running these cookies on your website.