Increasing numbers of patients are seeking out treatments such as prolotherapy or even neurosurgical fusion surgery to treat a wide range of symptoms which could be caused by ligamentous laxity or damage affecting stability at the upper cervical spinal segments.

The problem is that most of these patients have been searching for answers to their problem on the web and in effect self diagnosing. Unfortunately some authors on the web make strong claims for the potential benefit of prolotherapy persuading patients, many of who are desperate for help, to seek this treatment for themselves.
This short posting is an attempt to introduce some clarity to the issue.

In my experience there are three types of patients seeking out this treatment.
The first is the group with hereditary connective tissue disorders such as Ehlers Danlos syndrome whose various symptoms overlap with the cervical medullary syndrome (see below). Not all of these patients have actually been formally diagnosed with EDS but one or other practitioner has told them they are hypermobile.

The second group is those with a history of trauma to the upper neck such as whiplash syndrome or a direct fall causing compression or extension/ flexion strain (without actual bony injury) resulting in prolonged symptoms such as headache and/or neck pain.

The third is a group of patients without any history of neck or head injury or diagnosed hypermobility syndrome but with wide ranging symptoms which overlap with the cervical medullary syndrome and other conditions such as post viral fatigue syndrome or ME, fibromyalgia or physiological and autonomic disturbances found in the EDS group. One reason for this is that it has been suggested that the vagus nerve, whose origin in the cervical medulla lies in close proximity to the nerves entering from the upper cervical segments, may be affected. The vagus nerve controls widespread bodily functions (digestion, heart rate and rhythm, blood pressure, breathing) and therefore disturbance can cause a plethora of symptoms not unlike chronic anxiety. Complicating this picture is the strong association of anxiety and depression with chronic musculoskeletal pain particularly when undiagnosed, dismissed or simply unresponsive to common therapies.

So much overlap between these conditions can easily confuse patients and doctors. To demonstrate this I list the symptoms below under these headings.

and similar conditions may have any of the following symptoms independently of craniocervical instability:

Associated with the hypermobile EDS variant upper and lower gastrointestinal tract complications such as swallowing difficulties and sluggish stomach and large bowel, causing nausea, vomiting, acid reflux, bloating, pain, and absorption and food intolerance concerns; autonomic disturbances of heart rate and blood pressure, bowel and bladder function, and temperature regulation; anxiety, depression, and phobias; and organ / systemic inflammation related to mast cell activation.
If I were to list the physiological symptoms associated with chronic anxiety, depression and chronic fatigue states they would look rather similar.

So how do we decide if you really have some sort of CCI problem?

can demonstrate abnormalities in the brainstem such as Chiari type 1 or 0 which may present with cough induced headache.

can show abnormal relationships of the base of the skull with the atlas, axis and odontoid peg and measurements can be taken particularly in end rage flexion or extension or rotation to ascertain whether you have an abnormal range of movement suggesting instability (the clivoaxial angle greater than 135 degs, Grabb Oakes measurement more than 9mm or Harris more than 12mm, atlanto axial rotation more than 41 degs). These figures are an arbitrary cut off between at the 95th percentile.
However lying outside the 95th percentile of normal doesn’t necessarily mean you are bound to have symptoms, or even have a clinical problem. Many gymnasts, dancers and acrobats have extreme ranges of movement.

or those taken by videofluoroscopy are being used by some practitioners to make this diagnosis but their validity has yet to be established. Similarly MRI and CT scanning techniques are being researched as a means of revealing dynamic relationships between the cervical vertebrae but are still in development.

Features in the history

Include trauma to the head and neck likely to have caused ligamentous strain or damage with resulting neck pain and headache.
Hypermobility disorder.
Failed to respond to manual therapy and spine stabilisation exercises.
Benefits from using a stiff collar.
Frequent episodes of locking (cricked neck) with local pain and spasm.
NB: clicks clunks and grating noises are very common and can be ignored unless accompanied by pain and ‘locking up’ of neck.
Fatigue and neurological symptoms of brain fog, poor memory and concentration may accompany the above but are not a central aspect of the diagnosis. Neither are vascular and autonomic disturbances such as racing heart, faints etc

If conservative therapy has failed and a cautionary note here for all those who seek the magic bullet of ‘hole in one’ chiropractic or other high velocity thrust techniques (HVT). Having the upper cervical vertebrae manipulated by HVT more than 3-4 times is likely to lead to greater ligament laxity and instability. Don’t go down this route!

Minimally invasive therapy such as prolotherapy to the accessible upper cervical connective tissues may be worth a try but as yet there is no direct evidence in a peer reviewed journal that it works any better than placebo, because no such trial has been done, despite all the claims for its success, which are purely anecdotal.

However careful injection of a fibroproliferative solution (hypertonic dextrose with/ without 2% phenol) under X ray guidance to the posterior ligaments in the midline, and articular capsules at the same levels, performed on 3-4 separate occasions is much less invasive than fusion surgery and with less risk of complications.
Neurosurgical fusion is for severe cases where imaging has established instability beyond reasonable doubt after all other approaches have been tried. 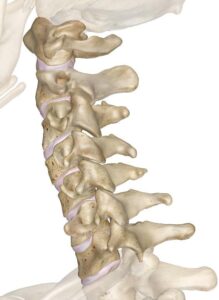 We are following the Government’s guidelines as regards hygiene and physical distancing within all areas of the clinic. Patients are asked not to attend if they have a cough, cold, fever or headache. Every patient is asked to use the antibacterial cleansing agent as soon as they arrive in the clinic and when they leave.

Standing CT – a new service at the Oving Clinic

Over the last few months of lockdown under the Coronavirus threat people have been walking, jogging and exercising more than ever. This is good but inevitably for some, this has brought to the surface underlying issues with ankle, foot and lower limb mechanics causing painful problems.

We are following the Government’s guidelines as regards hygiene and physical distancing within all areas of the clinic. Patients are asked not to attend if they have a cough, cold, fever or headache. Every patient is asked to use the antibacterial cleansing agent as soon as they arrive in the clinic and when they leave.

The Manchester United and England captain needed the glucose jabs to cure his crippling back injury which turned him into “an old hunchback” and threatened to KO his place in Fabio Capello’s squad for South Africa.

The 13th Everest Marathon in December

Hello my name is Petra Tanner. Most of you know me as physiotherapist at Oving Clinic or Tim Hills crew on sunbeam Query. This year I have decided to run in the 13th Everest Marathon in December. (Yes I like a challenge)

This website uses cookies to improve your experience while you navigate through the website. Out of these, the cookies that are categorized as necessary are stored on your browser as they are essential for the working of basic functionalities of the website. We also use third-party cookies that help us analyze and understand how you use this website. These cookies will be stored in your browser only with your consent. You also have the option to opt-out of these cookies. But opting out of some of these cookies may affect your browsing experience.
Necessary Always Enabled

Any cookies that may not be particularly necessary for the website to function and is used specifically to collect user personal data via analytics, ads, other embedded contents are termed as non-necessary cookies. It is mandatory to procure user consent prior to running these cookies on your website.